Token2Shell can redirect received text to a printer instead of displaying them. You can also preview and print a PDF file over existing connection within Token2Shell. Since this local printing feature is controlled by terminal control escape sequences, you can use it with any connection type (SSH, TELNET or etc.) supported in Token2Shell. 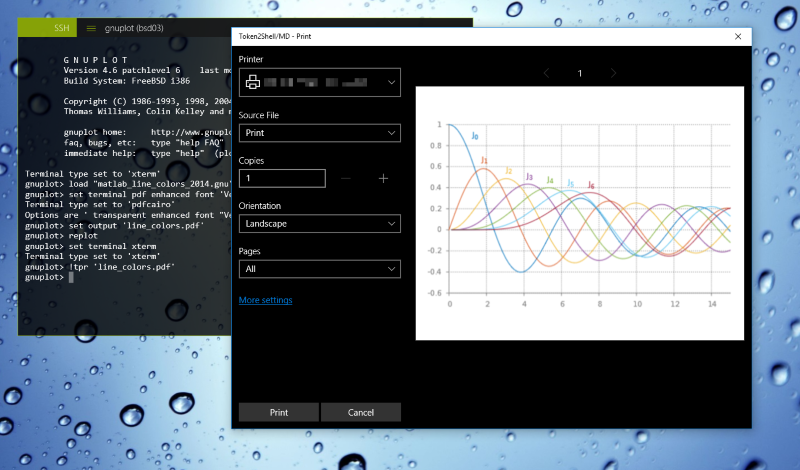 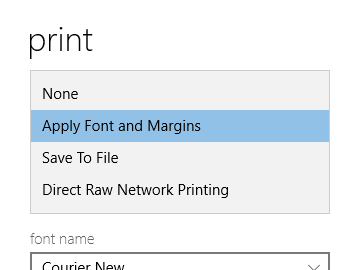 If a plain text file or content is received, it's formatted according the font and margin settings. Text lines are not wrapped and 0x0C (or U+000C) character is recognized as a form feed control character that starts a new page.

Once the content is formatted or loaded, Token2Shell shows it in a preview window.

Token2Shell currently supports plain text and PDF content. For unsupported content or files, you can still save it to your personal folder.

Instead of a preview window, Token2Shell directly opens a "Save As" popup and stores the content as is.

Token2Shell opens a TCP/IP connection to the specified address and writes the content as it's received. No print preview window will be shown in this mode.

Please note that when direct file printing (ESC[2016i) is used, Token2Shell sends the original file content to the printer instead of the raw encoded data it received from the server. Hence, if your server can generate actual printer control codes, you can transparently have them printed on your local printer.

For example, if your local network printer accepts PostScript and your server can also generate output in the same format, you can simply save your output as a PostScript file and send it over "direct file printing (ESC[2016i)". You can also safely transfer printer control codes with binary data such as PCL.

Printing in Token2Shell is started and stopped by the following terminal control escape sequences:

<filename> must be percent-encoded (or URL encoded). If ";filename=<filename>" is not provided, Token2Shell assigns a random file name.

Please note that ";charset=" parameter will be ignored even if provided. The character code page currently set for the terminal session will always be used.

In order to make use of the direct file printing feature supported in Token2Shell, the printing command and data must be sent from the server in data URI scheme. This can be easily accomplished by using tools and commands commonly found in Unix-like systems.

The following script demonstrates one of such possibilities. This script should work on most Unix-like systems with modern shells such as bash or tcsh.

After downloading, please check its content and make sure the tools and commands used in the script are supported by your server. Once you've confirmed its compatibility and made necessary changes, you should upload it to your "~/bin" folder and give it "execute" permission:

Once it's ready, you can print a PDF or text file over the current connection by issuing the "tpr" command (ex. tpr "/plot/lines.pdf").