Replacing the OS for Docker Console 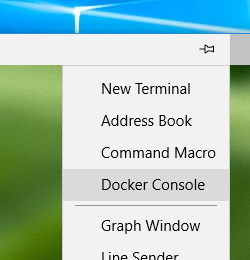 Hence, if you want to replace the OS for the Docker Console, you simply need to create a new container with your own OS image and name it token2shell_root.


1. Create your own OS container image

Docker already has many official Linux images. However, they include only minimal set of tools and optimized for running a single app instead of providing a shell prompt. Hence, you should consider building your own image on top of official OS releases.

For additional information about official OS releases and building your own images, please visit:

Please note that in order to access the Docker server installed on Windows from your new container, you must have a "docker" client program. token2shell_root has this binary in /usr/bin. You can copy this to your new container or freshly download it from the official Docker site. When downloading from the official site, please note that you're downloading a full package that also has other daemons and utility binaries; you just need a binary named "docker".

This also will close the connection.

4. Press F5 and reconnect to the Docker Console

Token2Shell should now open your new container instead of the default one.